Exploring the tiny patch of forest next door in my pyjamas and flip flops was one of my favourite pastimes. Telling people that I had the ocean as my front yard and the mountain as my backyard was always fun too. I guess that’s just some of the perks you get for growing up on the island of Borneo. So let me share with you some secrets of the place that I fondly call home.

Surprise! If you didn’t already know, Borneo is not a country. It’s actually composed of three different countries – Malaysia, Indonesia and Brunei. The Malaysian part of Borneo is divided into the two states of Sabah and Sarawak ; the Sultanate of Brunei is located between these two states. Meanwhile, the Indonesian part of Borneo is known as Kalimantan and is divided into the five provinces of Central, East, West, North and South Kalimantan. 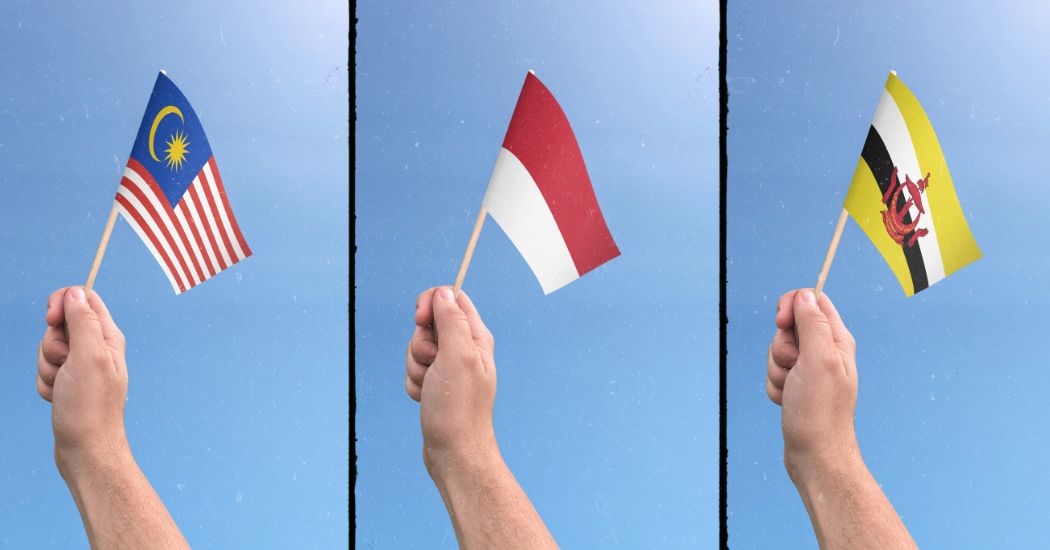 Malaysia, Indonesia and Brunei – the three countries that make up Borneo. 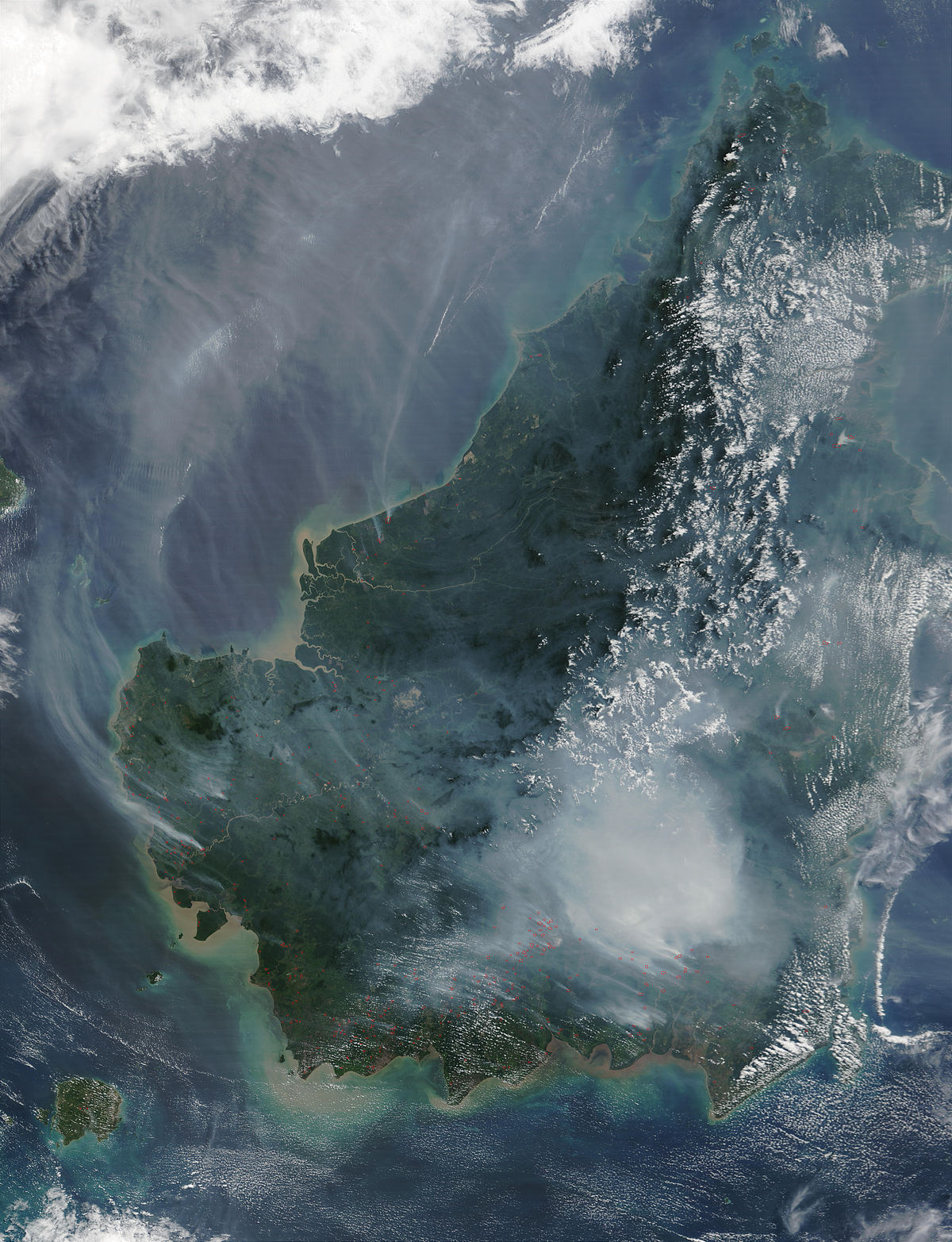 Satellite image of the Island of Borneo.

3. The rainforest of Borneo is ancient 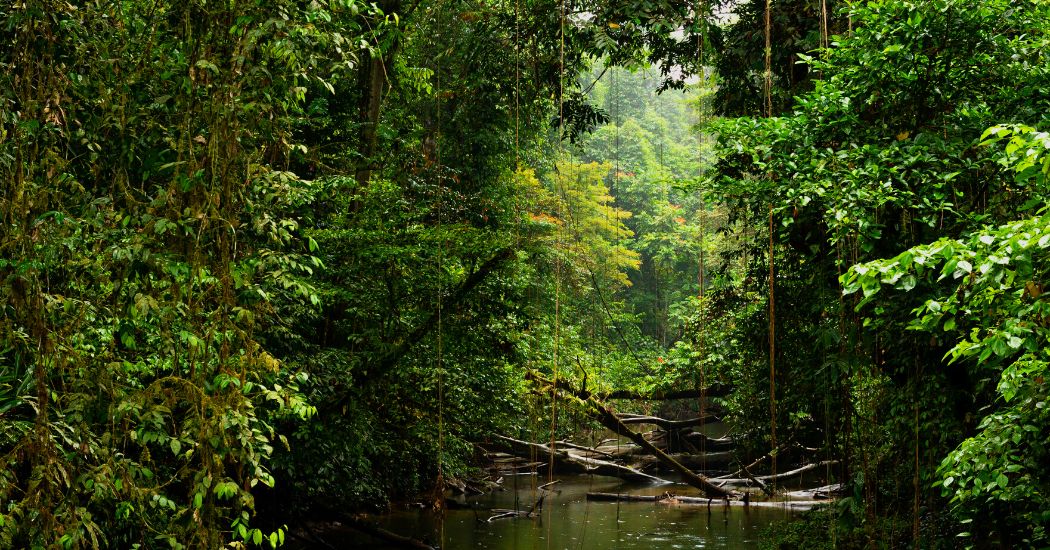 4. It’s home to the smallest elephant on the planet

The Borneo pygmy elephant (Elephas maximus borneensis) is the world’s smallest subspecies of elephant. They are less than 2.6 metres tall with huge ears, round tummies, and long tails that may brush against the ground as they walk. Borneo elephants are a gentler variety than Asian and African elephants, and their calm demeanour has led some scientists to believe they are descended from a domestic herd. Pygmy elephants are an endangered species, with an estimated 1,500 remaining in the wild, principally in Sabah, Malaysian Borneo. 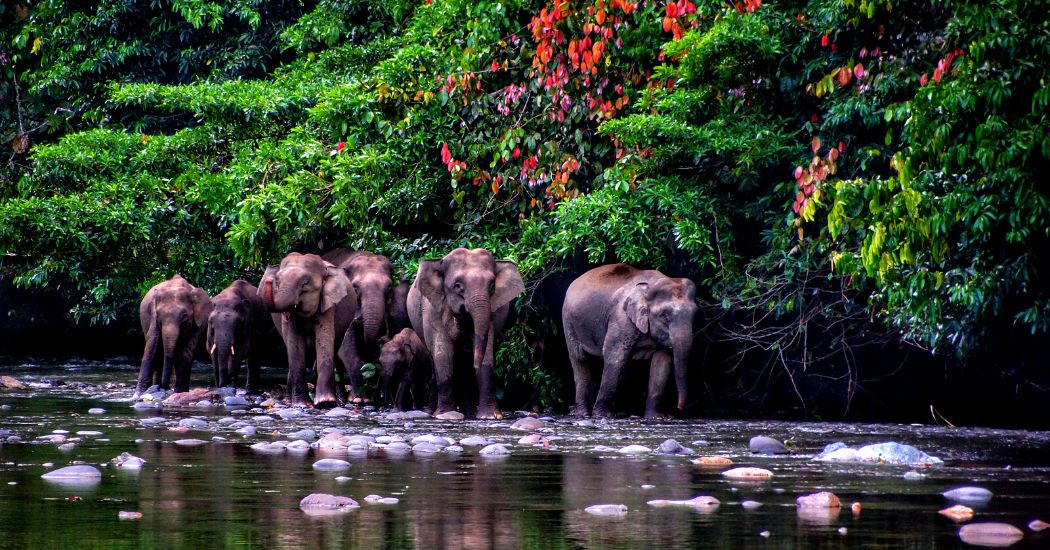 A herd of Borneo Pygmy Elephants walking along a river in Danum Valley, Sabah.

5. The largest flower on Earth is here too! Pssttt… It’s also the stinkiest!

The Rafflesia arnoldii specifically has the largest bloom on Earth. Generally, Rafflesia is rare and fairly hard to locate. It is especially difficult to see in bloom (the flower takes about five years to bloom but only lasts five to seven days after it does). There is no exact blooming season of Rafflesia, but it is believed that the rainy season is more favourable. Thus, if you were planning to visit Sabah, where there is the highest concentration of these plants, the monsoon period in April to May or September to October would be perfect. 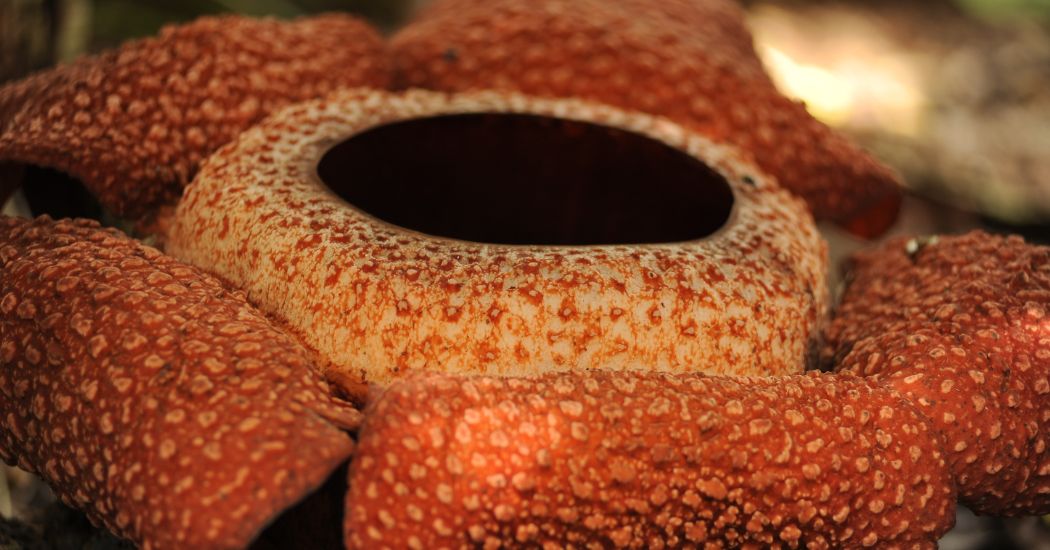 It smells like rotting meat yet people flock to look at it. Which is understandable since it is the largest flower in the world! But do take note that the Rafflesia flower petals are highly sensitive to human touch and turn black and die within hours of being touched. So if you were to ever be lucky enough to see one, remember to not touch the petals!

6. Which monkey has the biggest nose?

The Proboscis monkey of course! Bayau as the Sabahan locals would call it, or bekantan in Indonesia. The proboscis monkeys (Nasalis larvatus) are endemic to the island of Borneo, which means that you can only find them there. The huge pendulous nose is only found in males which assist them in producing loud booming sounds that serve as alarm messages as well as enticing females. Larger noses typically means that the males are more dominant, which makes them more attractive to the females. They live in organised harem groups consisting of a dominant male and two to seven females and their offspring. 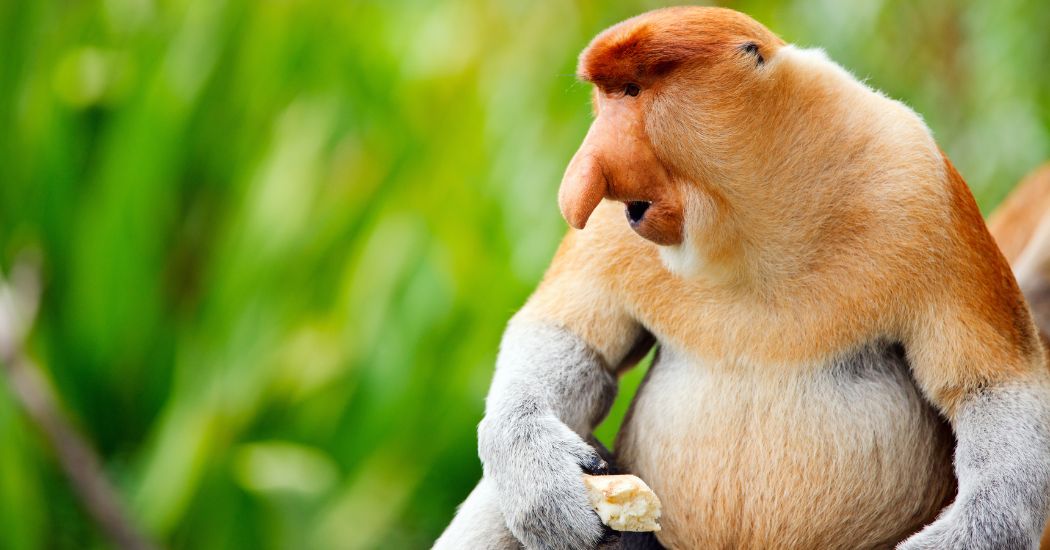 Proboscis monkey – the monkey with the biggest nose on the planet!

Proboscis monkeys are the most prolific swimmers in the primate world, frequently leaping from tree branches and splashing into the water with a hilarious belly flop. They’ve evolved webbed feet and hands to help them escape their major predators, which include crocodiles. Oh, since we mentioned belly, there’s something else that might just surprise you. Proboscis monkeys actually have nine stomachs! However, they only eat leaves, seeds and unripe fruits since mature fruits contain sugar, which ferments in their stomachs and causes fatal bloating.

7. Akinabalu has the highest peak

Mount Kinabalu, Southeast Asia’s tallest peak, is located on Borneo and rises 4,095 metres above the island’s northwestern shore. Mount Kinabalu can be climbed in two days and one night, with the summit reached just in time for sunrise on the second day for superb views above the clouds. 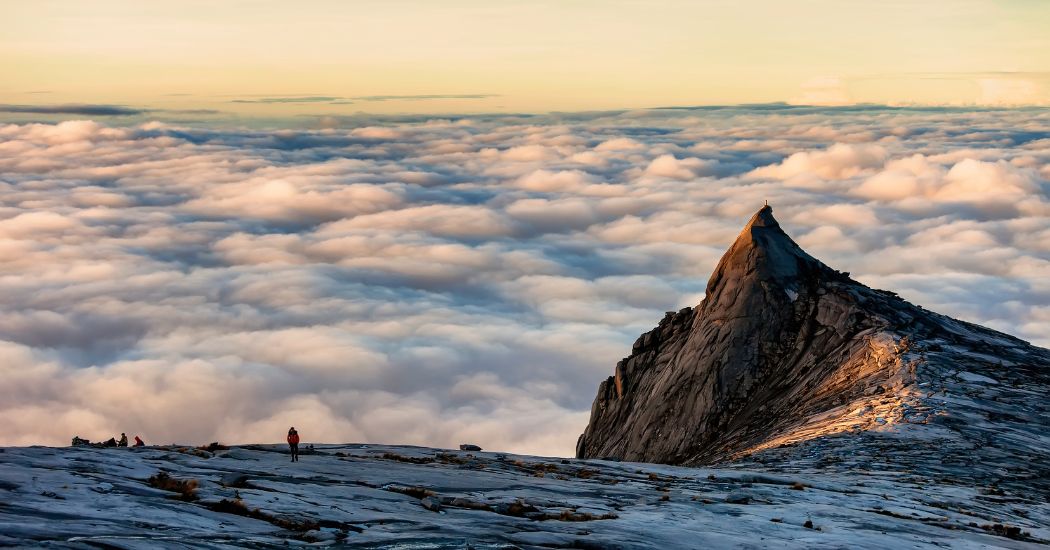 The tallest summit in Southeast Asia.

The mountain is the indigenous Kadazan-Dusun people’s spirit homeland, and its name is taken from their term Akinabalu (“Revered Place of the Dead”). In local custom, the mountain is regarded as sacred, and while it may seem obvious, you should not remove your clothing at its summit as this is considered offensive (not to mention illegal). In 2015, a group of young foreigners learnt the hard way when they were imprisoned, fined, and deported for posing naked at the summit.

8. One of the richest monarchs in the world is from Borneo

He was formerly the world’s richest individual, and his net worth is today believed to be approximately US$28 billion. Hassanal Bolkiah, the Sultan of Brunei, has long held the title of richest royal in the world. He did not lose any money, but was simply eclipsed by Thailand’s Vajiralongkorn. 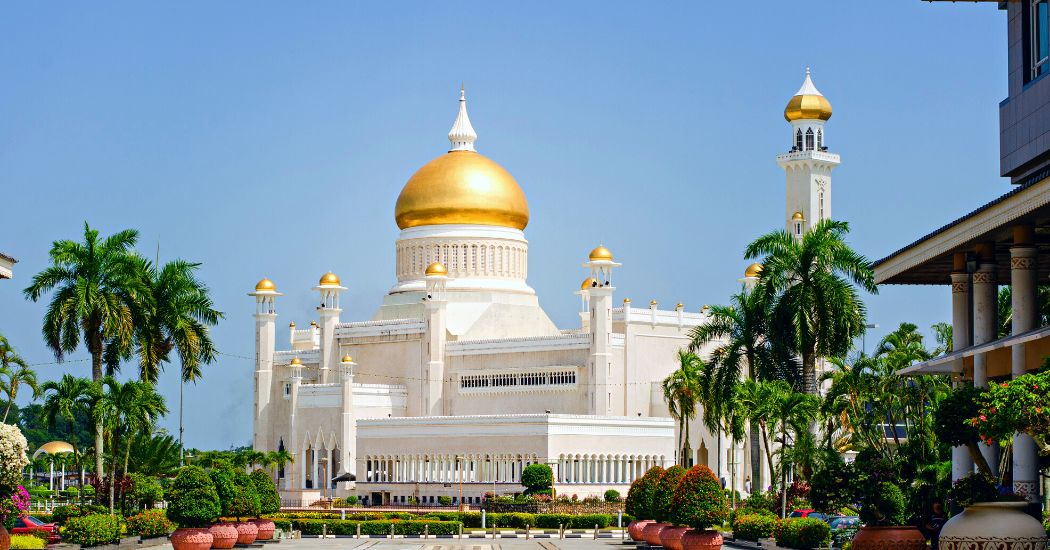 The Sultan Omar Ali Saifuddin Mosque in the country of Brunei Darussalam – the nation ruled by one of the world’s richest monarch.

He spends his money on his Istana Nurul Iman palace, which has 1,788 rooms and is regarded the largest in the world by the Guinness Book of Records. He is notorious for his excessive spending, which ranges from his love of gold (his Rolls Royce is gold and even his sinks are made of gold), to his extensive collection of at least 7,000 cars, to spending $20,000 to fly his favourite barber from the UK to Brunei to ensure his locks are in perfect condition.

9. Borneo also has one of the richest biodiversity

10. The island is rich in culture too

The third largest island on Earth is home to more than 23 million people, which comprises more than 200 ethnicities, with their unique cultures and traditions. The Ibans make up the majority of Sarawak’s population (more than 53% in 2021). Formerly known as the most fearsome headhunters in Borneo, the Ibans of today are a generous, hospitable, and peaceful people. The term Kadazan-Dusun refers to the grouping of two indigenous tribes of Sabah, the Kadazan and the Dusun. They are also the largest ethnic group in Sabah, accounting for over 30% of the population. They are generally traditional farmers who cultivate paddy rice and upland rice, as well as hunt and ravine fish. The Harvest Festival, or known locally as Kaamatan, celebrated on the 30th and 31st of May, is the most celebrated holiday of the year by the Kadazan-Dusun to thank the Rice Spirit and give thanks for a plentiful harvest. 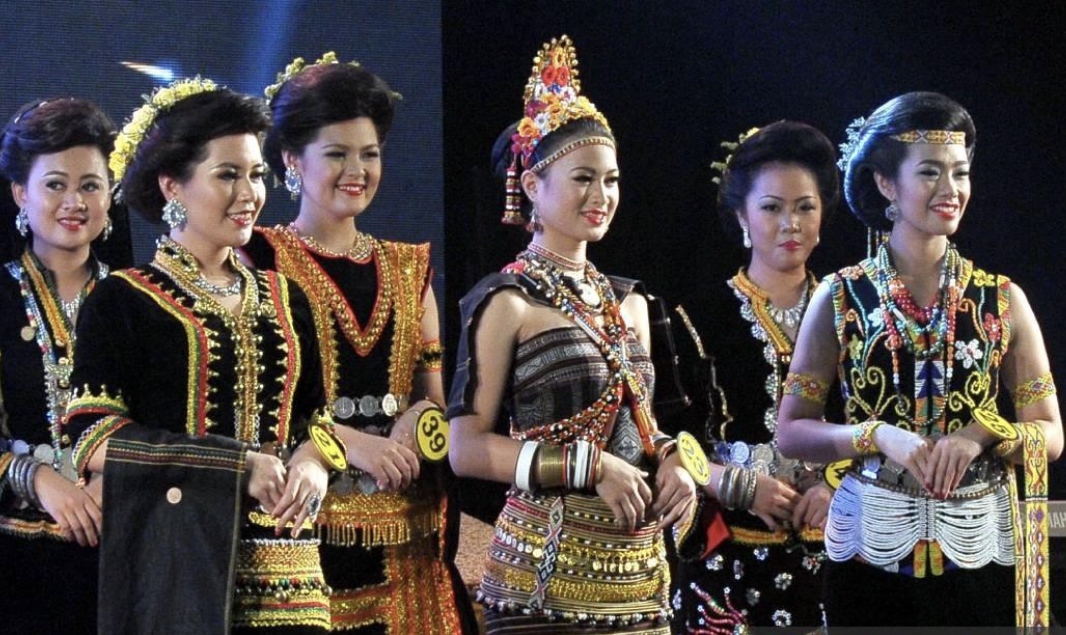 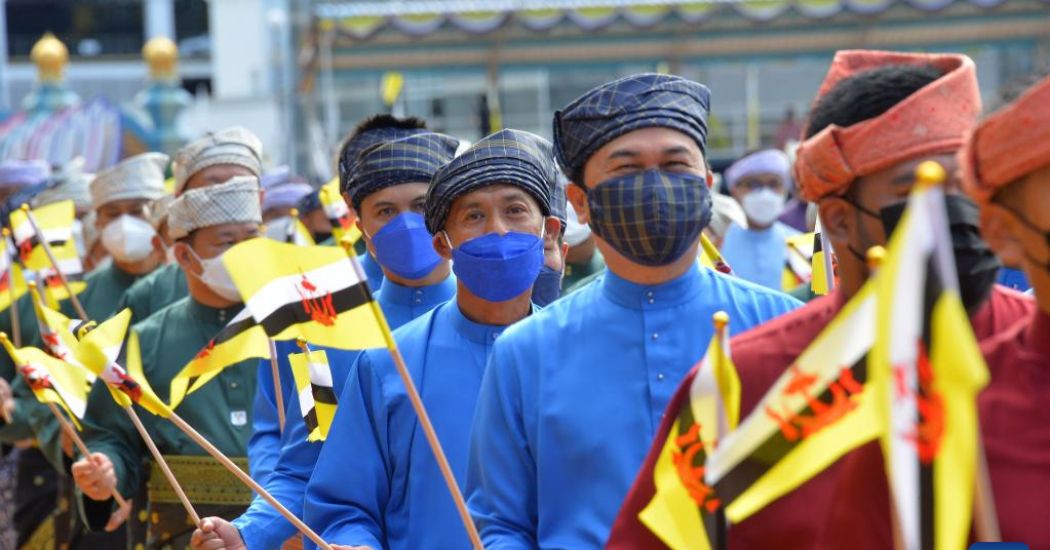 There are three main communities in Kalimantan: the Dayak (43,5%), Malays (here defined as Muslims), 41,5%, and Chinese (11%), with other racial groups (Madurese, Javanese, Batak, Minang, and Arabs) making up roughly 4% of the total population. From the oldest to the richest, the highest to the smelliest, and the smallest to the biggest. There are multitudes more secrets about Borneo that I could share with you, like one of the best scuba diving spots in the world. But I think I’ll keep those secrets a secret for now, and maybe you can discover them when you pop by for a visit.